On the morning of St Valentine’s Day 1929 four men allegedly linked to Al Capone, shot dead five members of the North Side Gang and two gang collaborators. The shooters, two dressed as police men lined the men up against the wall inside the warehouse as if for a police shake down. Using Thomson sub-machine guns they opened fire. The gunfire alerted several passers-by who were fooled by the two fake policemen emerging from the warehouse, leading two perpetrators at gun point to the get away car. No-one was ever convicted for the massacre.

Available with 16″ or 18″ chain, just let me know which you would prefer when you place your order.

Your necklace will come in a black gift box with a black bow.

All jewellery is hand made at my studio in Cornwall, south-west England. 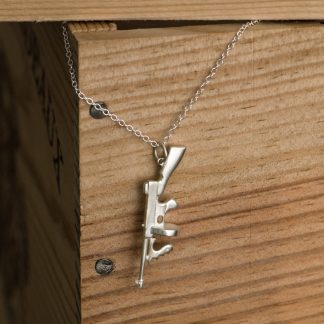